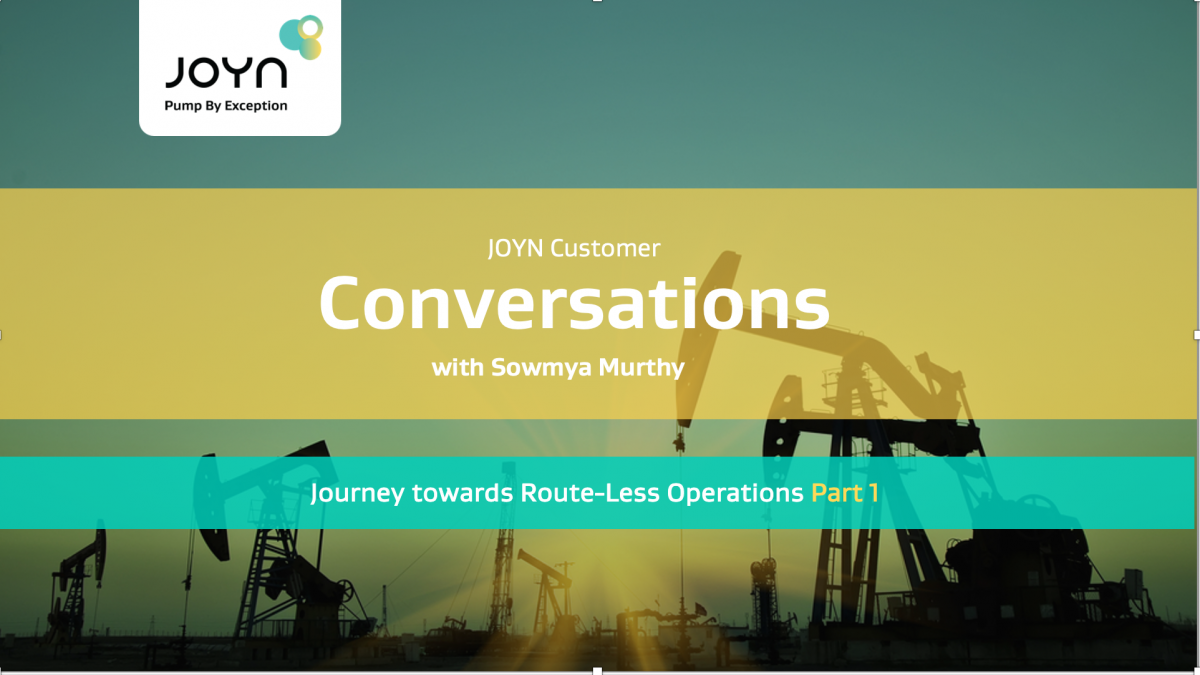 Last year at EVOLVE 2019, I had an opportunity to speak with the IT representatives of one of the top 50 E&P companies who operate in two core areas: the Permian Basin and South Texas regions.  Liz Green is their Permian Business Partner and Pete Owens manages their IT Manager and Field Technology.  I spoke to them on how they took on a relatively aggressive path to route-less operations and how their organization supported them with strategy. Here is the first part of an excerpt from our conversation.

*Please note that the customer name has been masked upon request. Our customer is willing and open to having a one on one conversation if you would like to pursue JOYN platform for your field.

What were some core tenants of that pump by priority vision that IT had to get buy-in from the leadership?

Pete: John, who heads our Operations and the Advanced Analytics and Emerging Technology Group, did a roadshow which had a snowball effect. He had this idea of creating a next-generation app that would break the norms, similar to what Uber did for taxis. He wanted to push the use of mobile devices, a single tool that connects people, with integrated data capture, and easy to use in the field. We all struggle with getting people to buy into change. So, we looked at things like risk and materiality, which became a part of the prioritization.

John analyzed data such as spill rate compared to liquid production and built a matrix of what would be the most impactful places from his point of view. All the field groups had Haz-op meetings to consider this data and build visit frequencies and have the tool to carry this out.

What are some of the areas you knew you had to tackle for going route-less?

Pete: We had to deal with a lot of sense of ownership of routes and wells. So, we got groups of people at the management level together, to sell the idea of the values that could be gained — like tracking tasks and eliminating the tasks that do not impact production, etc. This was bought into at a higher level, and we had to do the same thing at the field-base level. We understand the sense of ownership.

For example, we understand that people have their own route but maybe their route doesn’t look as good as somebody else’s route. And if we have three people going by one whole area, maybe something will get picked up in one place that wasn’t picked up by the person who normally went. We still struggle with trying to expand this sense of ownership.

Route-less is a conversation of trade-offs. Could you take us a little deeper into other trade-off conversations that needed to happen?

Liz:  Yeah, ownership of wells was another conversation. When we got the sign off from upper management, we needed to talk to our field staff, our production engineers and IT to figure out the process of getting the tasks done in the field. If we don’t know who’s picking up the tickets or if a well is down who’s going to address it, because it isn’t one person’s job anymore. It’s spread across four or five different individuals in a single area. So, we got a group together for three days. We did a process workshop with folks from IT, Field Superintendents, and Engineers. We were about sixteen people. We sat down and had a great conversation and ultimately came to an agreement on four ticket items with one of them being the process.

We discussed what steps does a lease operator take in order to get the work done. So, first of all, anyone can create a task. Whether it’s an individual out in the field who sees something while he’s out and about in the day. Or an Engineer in the office because he sees a trend as off or a Field Superintendent because the Vice President gave him a call and asked him to stop by.

Then, a task is created. It sometimes gets approved by a foreman, if it needs approval. It gets prioritized, assigned and sequenced out to the worker to get the work done. To create this process, we went through many details, but, one of the big outcomes was figuring out the roles required. We thought that, as it was a new process, it had to be supported. Otherwise, the chances of it working out were less.

So, we designed two roles, one of a System Analyst who would sit at the headquarters and work on building a liaison between the field and the IT folks. The other role was of the “Optimization Foreman”. This role was located out in the field and was required to supervise all the tasks being undertaken in the field.

We also established the Foreman areas (route-less areas) during the workshop. For instance, in one of the fields, we optimized from 16 routes to three route-less areas.

One other thing we learned through this entire process was the difference in benefits. While FDG benefited the operator directly, the benefits of JOYN FSM were of a higher level. We now have visibility into the work done in the field. We now have an idea about the utilization rate, about how quickly we can respond to wells being down and how much additional production can be done.

One last thing we created during the workshop was a task list. JOYN FSM is predicated on getting tasks done. When we began the workshop, we had fifty-odd tasks, but Seven Lakes was expecting us to begin working with two. That was a huge challenge, but we ultimately tackled everything. From responding to a well down to cycling wells to picking up the trash and keeping the sides clean, we tackled all of these tasks. We came up with a list of regular tasks that needed to be done in the field and ranked up their priority against each other.

That was the first part of the conversation. Read Part 2 here: https://www.sevenlakes.com/blog/journey-towards-routeless-operations-part-2/

If you enjoyed this conversation, you might want to read this blog post by Shrivan Kamdar too 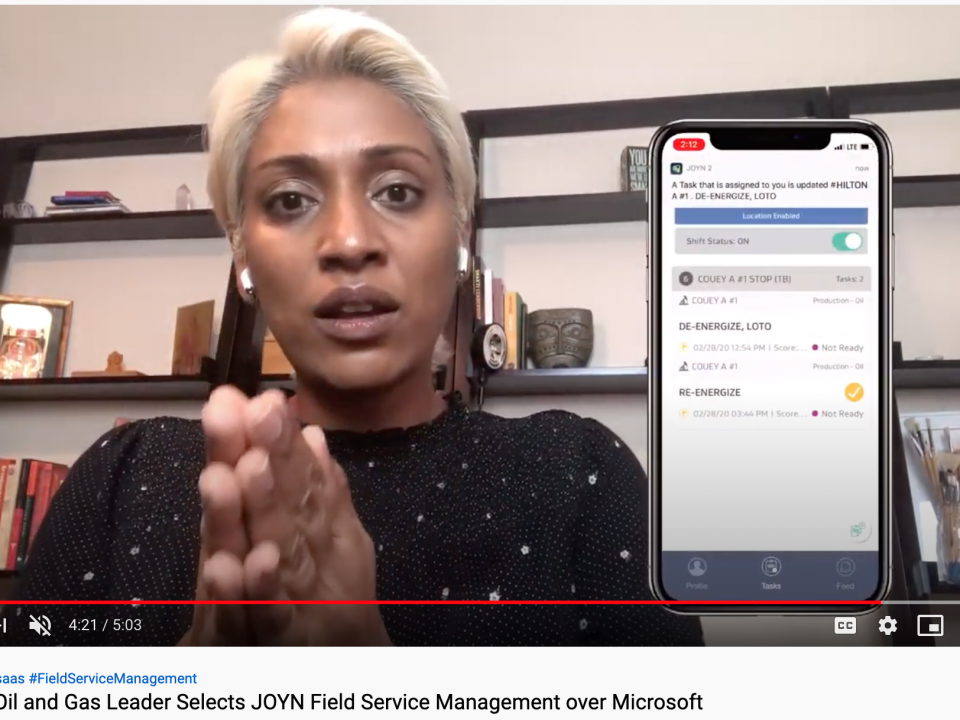 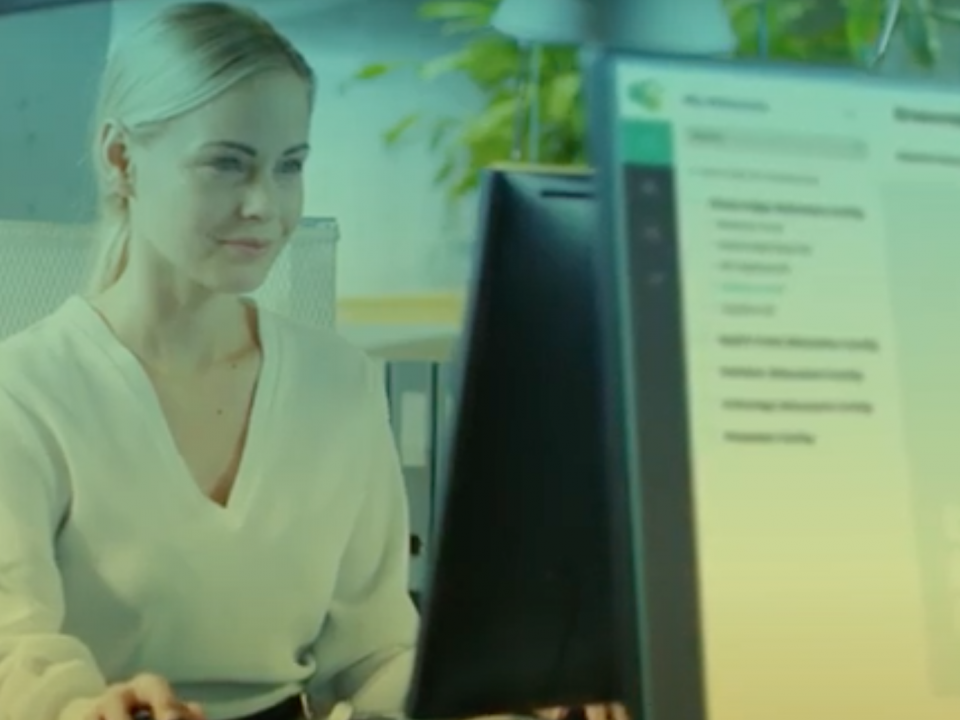